The Bleeding Land by Giles Kristian

Posted on May 4, 2012 by readinggivesmewings

I’m always a bit wary when one of my favourite authors decides to start a new project, especially when that author is Mr Viking himself, Giles Kristian. His Raven series of books have been some of my favourite books of the last few years, so when I heard he was starting a new series set during the English civil war my heart sank. The English Civil war is my least favourite period in history, as a secret Royalist I hate the fact that the dour and miserable Parliamentarians won and the religious intensity of the time puts me off as well. With this in mind I approached this book with not a little trepidation. 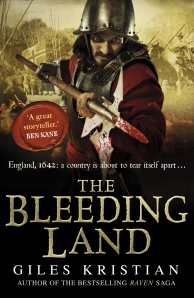 The story is set in 1642 and covers the build up to the first major battle of the war, Edgehill. We follow the fortunes of three siblings of the Rivers Family, Mun the eldest brother whose loyalty to his family and the cause of his king is unshakeable. Tom, a man driven by revenge who forsakes the protection of his family to stand alongside Parliament and finally Bess, their sister, who must watch the war rip her family apart while at the same time worrying about the future of her unborn baby.

With the country convulsed by religious conflict and arguments between the king and parliament it’s time for men to pick sides. As war creeps ever closer the Rivers men ride off to war, leaving the women to protect Shear House, little realizing that the women would have to fight just as hard as the men.

I have to say right off that I loved this book, the one thing you can say about Mr Kristian is that he is a storyteller and in The Bleeding Land he tells a cracking story. He weaves the different strands of the Rivers story together and while in a book about war it would be very easy to concentrate on the men, he has created two great women characters in Lady Rivers and Bess. The great thing is that I never took sides, I liked Tom and Mun equally and even though I will always be a Royalist, I enjoyed reading about the Parliament’s point of view. A great supporting cast gives the story its depth, with Prince Rupert and his devil dog a brilliant double act.

The battle scenes are suitable gory with plenty of blood and flying limbs and split open heads which is a bit of a Giles trademark. There are not many better writers of the joy and despair of battle and also he is brilliant at bringing the noise and sounds of battle alive.

A Stuttering volley of Pistol and carbine fire spat at them and Mun felt the thrum of lead ripping though the air but nothing hit him and he raced on, Hector matching the Prince’s mare for speed, his hooves adding to the rolling thunder, flinging mud.

I’m very much looking forward to the next two books and it will be interesting to see how Giles handles a character who inspires equal amounts of love and loathing in Oliver Cromwell.

Father of two girls with two passions, Reading and history. If I can combine the two then I am a happy person!
View all posts by readinggivesmewings →
This entry was posted in 17th Century Fiction. Bookmark the permalink.

8 Responses to The Bleeding Land by Giles Kristian